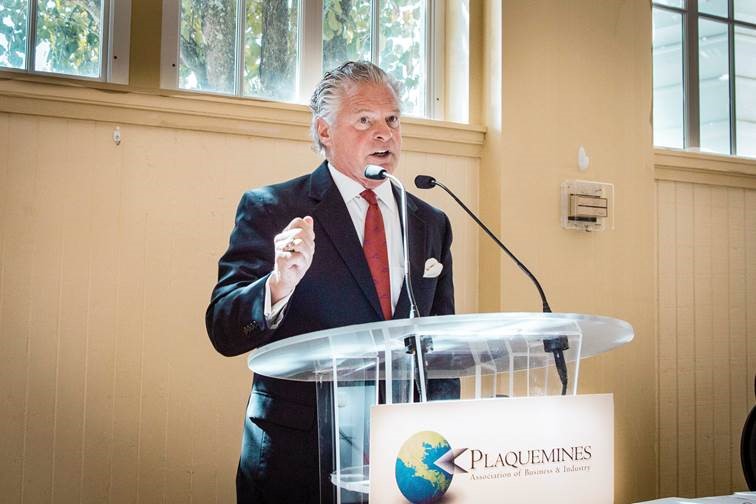 Plaquemines Port Harbor & Terminal District’s value to greater Plaquemines Parish has been a hot topic at recent political debates and parish council meetings. So, an update last week on the potential $19 billion in investments the port is pursuing was right on time.

PPHTD Executive Director Sandy Sanders was the featured speaker for the Plaquemines Association of Business & Industry’s Oct. 30 luncheon in Belle Chasse. Rather than fill 40 minutes by himself, Sanders set the stage before passing the mic to attending representatives from the various businesses which have announced their intention to build facilities along the Mississippi River in Plaquemines.

Each executive to speak offered updates and details on their respective developments, but a slide at the end of the presentation spoke loudest. The slide listed the potential overall value of each investment, the number of construction workers each is expected to require and the number of permanent jobs each intends to fill. There’s no guarantee each project will unfold according to plan, but if everything does go through, the parish could collect more than $160 million annually in taxes from the new businesses.

The above numbers don’t even reference the healthy salaries expected to accompany many of those 1,110 permanent jobs. Nor do the investment dollars include the shipping revenue expected to accompany PPHTD’s deals with American Patriot Holdings for shipping along the Mississippi River and Naval Air Station Joint Reserve Base in Belle Chasse opening its flight line to commercial air cargo.

American Patriot Holdings CEO Salvatore Litrico was Sanders’ first guest speaker. He recapped the capacity of the company’s custom-designed inland shipping vessels (2,500 TEU containers) along with deals already cut to serve ports in Memphis, St. Louis and Kansas City. He said deals with ports in Little Rock, Jefferson City, Mo., and Joiliet, Ill., are in the works. The APH vessels will ship imports up the river and exports down the river, saving industries at least 30 percent in costs while cutting shipping times.

Meanwhile, PPHTD officials continue to court investors for a container terminal in Plaquemines that will swap out the TEU containers. With partner ports upriver and Plaquemines at the mouth, Sanders said the PPHTD will “own the Mississippi River” when it comes to shipping. NAS JRB Commanding Officer Capt. Anthony Scarpino spoke about another “win-win” shipping partnership with PPHTD when it comes to air cargo. Comparing NAS JRB to other Navy bases, Scarpino called the Belle Chasse station “a quiet one, in kind of a bad way.” He said adding commercial air traffic will help the base reach its full potential but assured the PABI crowd that the majority of that traffic will fly over industrial areas instead of residential areas. Sanders added that introducing air cargo to NAS JRB will also bring the opportunity for industrial development of the land surrounding the base, which will in turn put pressure on the state to complete the Peters Road rail bypass to “get railroads out of the community.” Additional speakers included Jason Reeves, general manager for Tallgrass terminals, and John Wang, managing director for CCI. PHOTO CAPTION: Plaquemines Port Harbor & Terminal District Executive Director Sandy Sanders was the featured speaker for the PABI’s Oct. 30 luncheon. Photo by Zu Carpenter

With decades of maritime industry experience, Charles Tillotson joins the Port of Plaquemines team as…